The show in 2020 was cancelled due to Covid 19 restriction. It was decided to keep the tradition of the fell race alive. Giving the runners a chance to run the course over the week of the show 24th – 28th August.

Individual runners or small groups of runners were able to test themselves against the clock. Submitting their times vis social media to make up a results sheet. Twenty seven runners took up the challenge over the week, we had a mixed bag when it came to the weather Monday being the best day after that it came in poor including rain, strong winds and poor visibility but did not put runners off.

The fastest time was recorded by CFR runner Sam Holding 13.46.

It was good to see runners from other clubs taking part.

Although Ennerdale Show experienced its first wet day in 9 years, the Show went on! The unsettled weather combined with tired legs from Keswick Show two days before prompted a smaller field for the senior race than the record turnouts we’ve grown accustomed to in recent years. Nonetheless we were delighted that 35 hardy runners turned out to race.

Joe Richardson, known to many as a local farmer and former elite fell runner, did us the honour of starting the race and presenting the prizes.  Joe is part of the fabric of the Ennerdale Show, over the years showing sheep, judging sheep and competing in the fell race.

The runners set off in drizzle, and mostly finished in quite heavy rain. Conditions on the fell were windy and gusty – not a day on which last year’s course record seemed likely to be threatened.

Ricky Lightfoot (Ellenborough) led the race to the summit of Knock Murton and back. Martin Mickelson-Barron (Borrowdale) maintained close contact, with a gap separating the pair from U23 Joseph Hudd (unattached) in third position. Ricky Lighfoot clinched the title and the Jock Ireland memorial trophy in a time of 12:31 – before setting back out to the same fell for a training run!

The women’s title was won by Lucy Stobbart (CFR) with Tamsin Moran (unattached) the runner up.

Thank you to all those who turned out to support the Fell Racing – runners, helpers and spectators; and to the Ennerdale Show Committee for all that they do year round to make the Show overall the success that it is.

The blue sky and afternoon sunshine brought out a record field of 59 to the start line.

In the absence of the current title holder and record holder, the field was wide open. With some top-class local talent on the entry list along with some unfamiliar names and unknown quantities, speculation was rife as to how this would play out.

The race got off to a fast start, with Joseph Dugdale (CFR) and Ricky Lightfoot (Ellenborough) leading the field out to the foot of the fell. Spectators commented on the magnificent sight of the many-coloured vests snaking up the steep climb to the ridge. In less than 10 minutes the front runners were back in sight on the skyline, having fought their battle to the summit cairn and back, raising eyebrows about a potential new course record.

The yellow club vests of Ellenborough and Keswick were easily identifiable in positions two and three, while in overall lead was a plain black vest that didn’t seem to denote any club. Who was it…?

As he crossed the finish line, it was Jack Wood (Ilkley Harriers) who revealed himself as the winner, with a new course record of 11:25. Ricky Lightfoot finished 4 seconds later, and Carl Bell a further 2 seconds behind. The pace was such that all three were inside the previous record, set last year, of 11:33.

The leading woman, Kate Marriot (Keswick), finished 20thoverall in a time of 15:06. This is among the quicker winning times in recent years (the women’s record stands at 14:53).

Joe Richardson did us the honor of setting the runners off and presenting the prizes. Joe is well known to many as a local farmer and, in younger years, as an elite fell runner in his native Cumbria who rose to international competition. This was a busy day for Joe, who had earlier been judging the sheep. 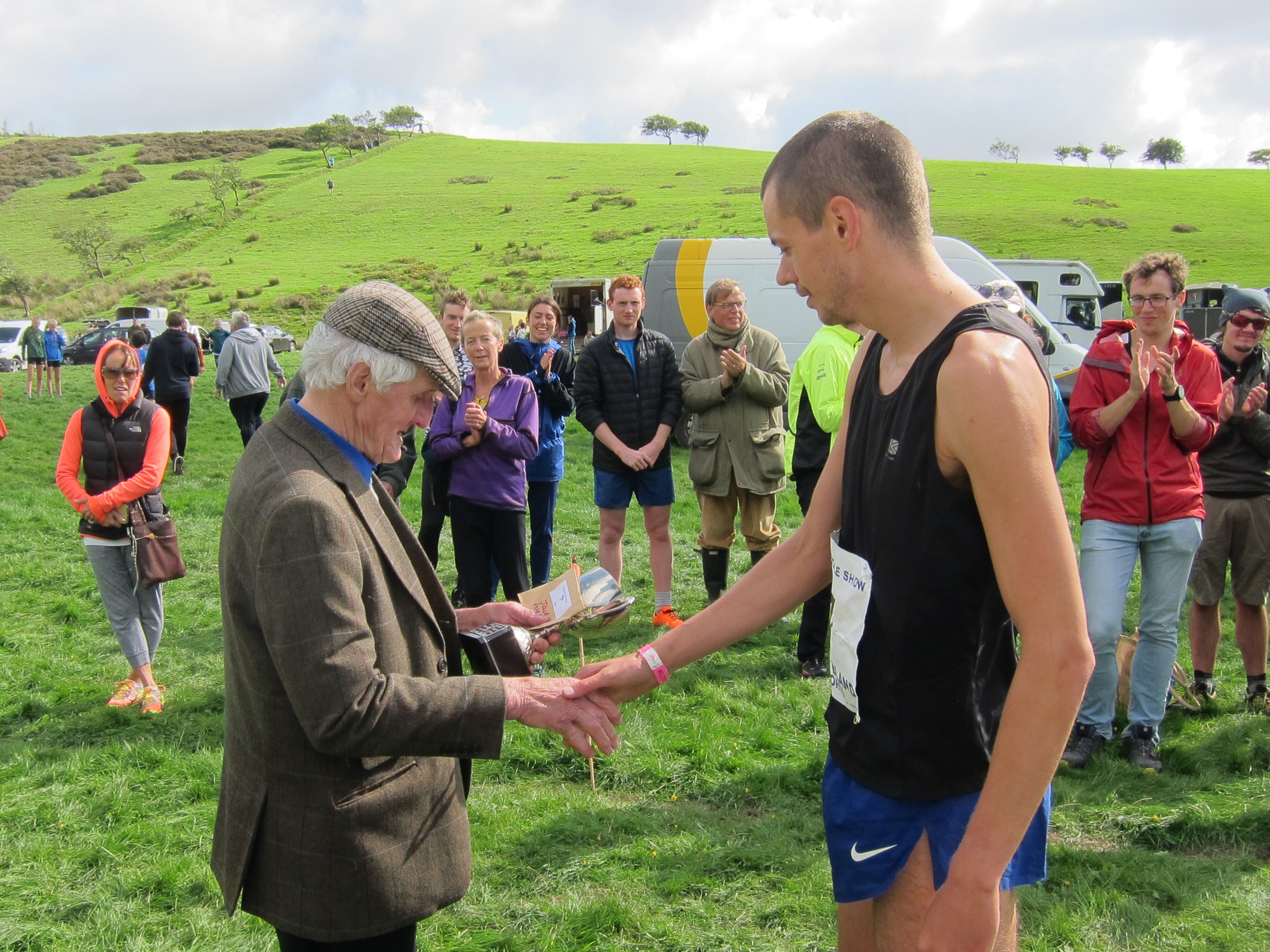 Above: Jack Wood (1st) receives his prize from Joe Richardson 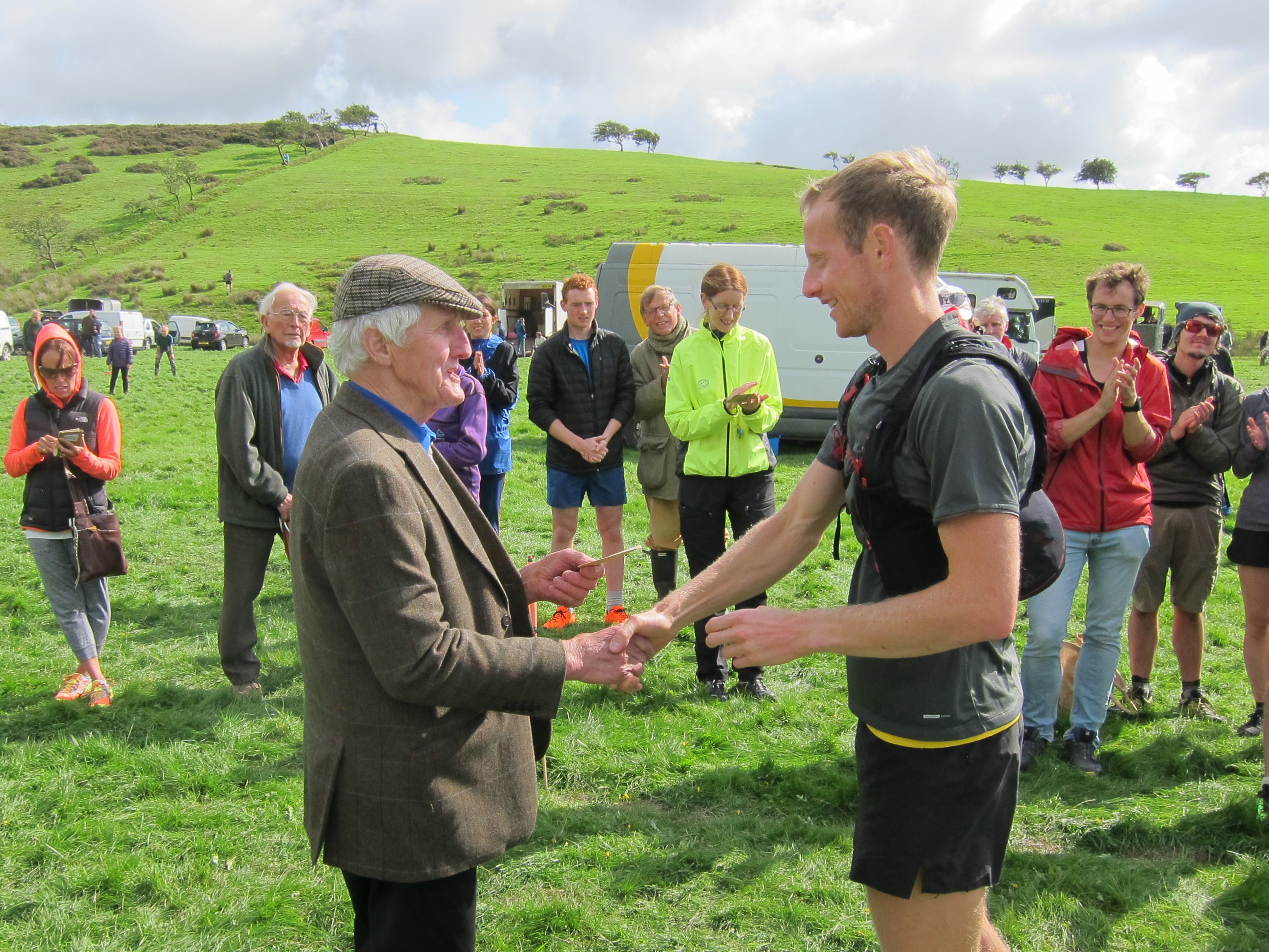 Above: Ricky Lightfoot (2nd) receives his prize from Joe Richardson 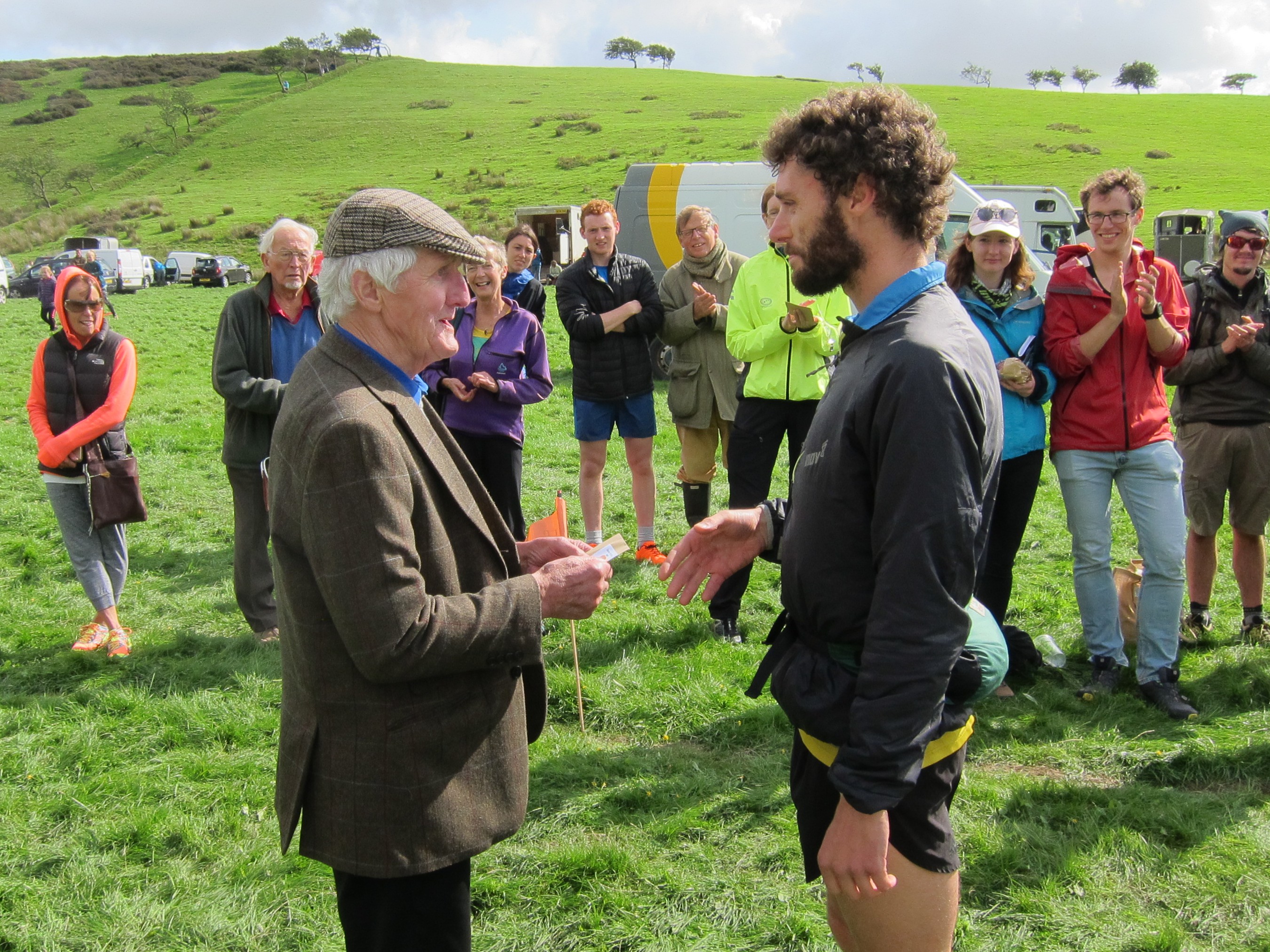 Above: Carl Bell (3rd) receives his prize from Joe Richardson 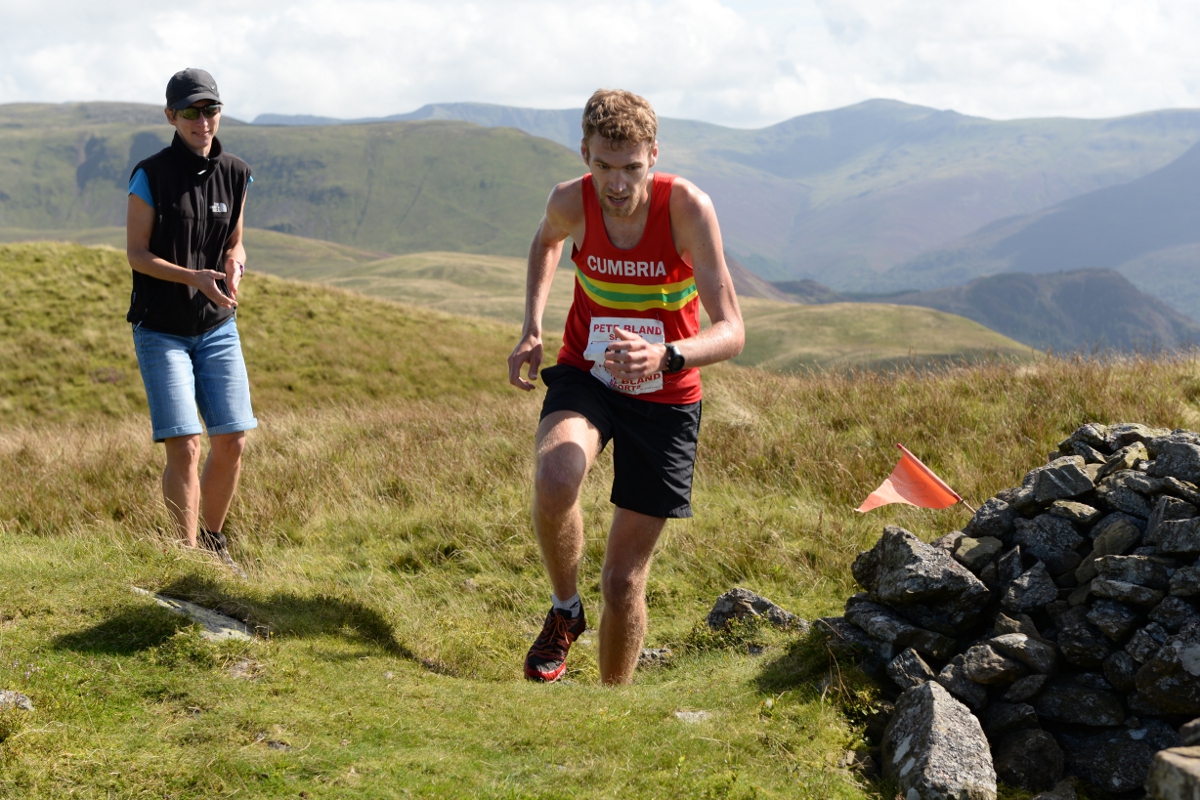 Perfect weather and dry ground promised fast running conditions, and with previous winners notably absent the field was wide open! On the start line: a record entry of 46 contenders. Joe Richardson, local sheep farmer and former fell race champion, set the runners off and later presented the prizes. 17 year-old Joseph Dugdale (CFR) set the pace. He flew up the steep initial climb and was first to attain Knock Murton summit. Some 4 places behind, Sam Stead (Keswick) was gradually reeling him in. When Joseph’ s blue vest came back into view on the skyline above the Show Field, Sam was challenging him directly. It was clear to spectators and stopwatch that this would be a very fast finish. Using the steep final descent to his advantage, Sam overtook through the heather/gorse to grasp the men’s title by one second in a new record time (11:33). Both men finished inside the previous record (11:50), set in 2013 by Ricky Lightfoot over a slightly longer course. The M40 category had the most entrants overall (12) and was won by Mike Robinson (Dark Peak). M70 drew a competitive field of 4 and was won by David Fell (CFR). The women’s field, uncharacteristically small this year relative to the men’s, was closely contested by the front-runners with Alison Matthews (Darlington) taking the title and Tiffany Penfold (Copeland) one place behind. Junior courses, set by Neil Atkinson, proved popular with a throng of 26 in the U13 event. In true Ennerdale Show spirit, our youngest fell race competitor was aged 7 and our eldest, 77. Thanks to the participants, helpers and supporters who together made the Fell Race a success. Also to the Ennerdale Show committee who do so much through the year to make this a great day out for all. Eleanor Williamson

A field of 45 equalled last year’s record entry for thismid-weekout-and-back race up Knock Murton. Alongside faithful locals, we were pleased to welcome a good number of visiting runners. Furthest travelled were from Hampshire and Essex (to the south), and from Glasgow (to the north). After heavy overnight rain and a misty daybreak, race afternoon was clear and dry providing superb running on this grassy, scenic course. With just 1 rushed hour off work, Ricky Lightfoot (Ellenborough) loyally came to defend his long-held title. In a fast run out, Ricky led thepack up the steep firstclimb with Rhys Findlay-Robinson (Dark Peak) at his heels. On the skyline, Rhys moved through and pipped Ricky to the summit cairn. Holding Ricky in pursuit on the descent, Rhys maintained his lead to secure the men’s title and Jock Ireland memorial trophy. 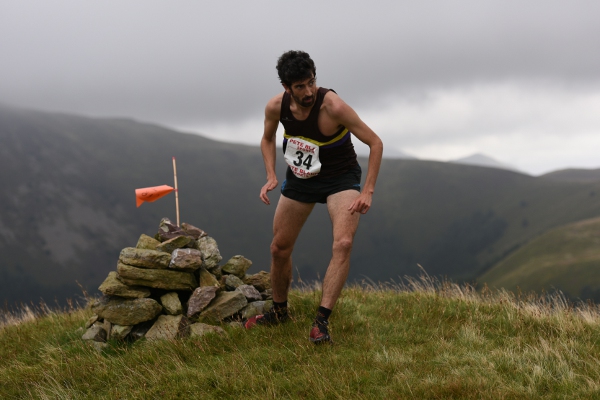 Rhys Findlay-Robinson, 2016 winner, begins his descent from the summit. Photo: Steve Wilson, www.granddayoutphotography.co.uk Rising star Joseph Dugdale (CFR), who placed 3rdoverall, was also the fastest U23 male. Impressively, there were 3 teenagers in the top 10. M40 showed the greatest depth, with 10 athletes in the category. Phil Davies (Borrowdale) and Darren Fishwick (Chorley) took the prizes, placing 4th and 5thoverall. M50 winner was Chris Knowles (Ellenborough), and M60 winner wasorienteerPete Nelson (West Cumberland OC). Unusually, there were no M70 entrants. Kate Apps (CFR), in her first season at L40, placed 18thoverall to win the women’s open title. Hannah Bradley (CFR), second prize, was also the fastest U23 female. The race made a fitting homecoming for West Cumbrians Dot Patton, Lindsay Buck (L50 prize) and Jane Mottram (L60 prize). The three had beenmedallistsat the World Masters’ Mountain Running Championships in Italy just days before. Lindsay, whobeenunable to attend the medal ceremony in Italy, was presented with her medal at our own prize giving. We werehonouredto have Joe Richardson start the runners and present the prizes. A local farmer and retired elite fell runner, Joe for many years competed in the Ennerdale Show race alongside showing his sheep. He finally hung up his fell shoes after competing internationally at Masters’ level. Ennerdale Show is a traditional Cumberland agricultural show, of which the fell race with its friendly atmosphere is an important and historic part. It is great to find the race so well supported by runners and non-running helpers. Thanks to all. Please come again next year!  Eleanor Williamson

Description: This out-and-back course is grass and heather underfoot, involves a steep climb and a ridge run to a summit, and will be partially marked with flags. The race attracts elite and novice fell-runners alike, and a wide range of ages from Under 23 to Over 70.

A record field of 45 gathered for thismid-weekout-and-back race up Knock Murton. Our grassy, runnable, scenic course attracts elite athletes and first-time fell-racers alike, and entrants were aged 17 to 71.

Ricky Lightfoot (Ellenborough) – defending title holder – led out to the fell gate, where a narrow trod through shin-high gorse kept the pack closely together up the initial steep climb.

Once on the ridge and into good grassy running, gaps quickly opened. Ricky led Chris Edis (Keswick) who led Howard Seal (CFR) as the race progressed over the first and second brows of Knock Murton to the distinctive cairn on the final summit.

Catherine Spurden (Keswick) placed 14thoverall to clinch the women’s title with a course record, with U23orienteer Rosie Watson in pursuit.

We were pleased to welcome runners on vacation in the Lakes. Notable mentions to the furthest travelled – from Inverness (north) and Brighton (south).

Local runners were loyal in their support, and two families – Watsons and Bradleys – each had 3 family members competing together.

Joe Richardson started the runners and presented the prizes. A local farmer and retired elite fell runner, Joe for many years competed in this race alongside showing his sheep.

Ennerdale Show is a traditional Cumberland agricultural show, of which the fell race with its friendly atmosphere is a key part, and it was fantastic to see the race so well supported by runners and non-running helpers. Thank you so much – and come again next year!

The strong turnout for Ennerdale Show 2013 reflected in a record field of 41 competitors in the Senior Fell Race. Alongside committed locals who had begged time off work to run, we were also pleased to welcome visiting runners on vacation in the Lakes who had earmarked our race via the Internet.

Participant found healthy competition in a friendly atmosphere. Here was true of depth of field with athletes in every age group from 17 to 73.

It was vest-and-shorts weather, with conditions clear overhead and firm underfoot.

All four finishedinsideRicky’s 2012 winning time, with Ricky himself setting a new course record of 11:50 – almost a minute faster than he ran last year.

Ricky led the field up the flank of Knock Murton to the skyline, and once the trod widened Rhys was able to overtake Steve into second place. Progressing along the ridge – unbeknown to spectators below – Rhys then edged past and led Ricky to the summit. Ricky retaliated on the return leg, and was first into the final descent with Rhys at his heels. As the pair flew down the steep grass and heather, Ricky opened the gap to finish 8 seconds clear.

Peter Newton, representing a track club from Michigan, USA, provided an international angle alongside one Scottish and two Welsh entrants.

My appreciation to all who supported the event – runners, helpers, marshals.